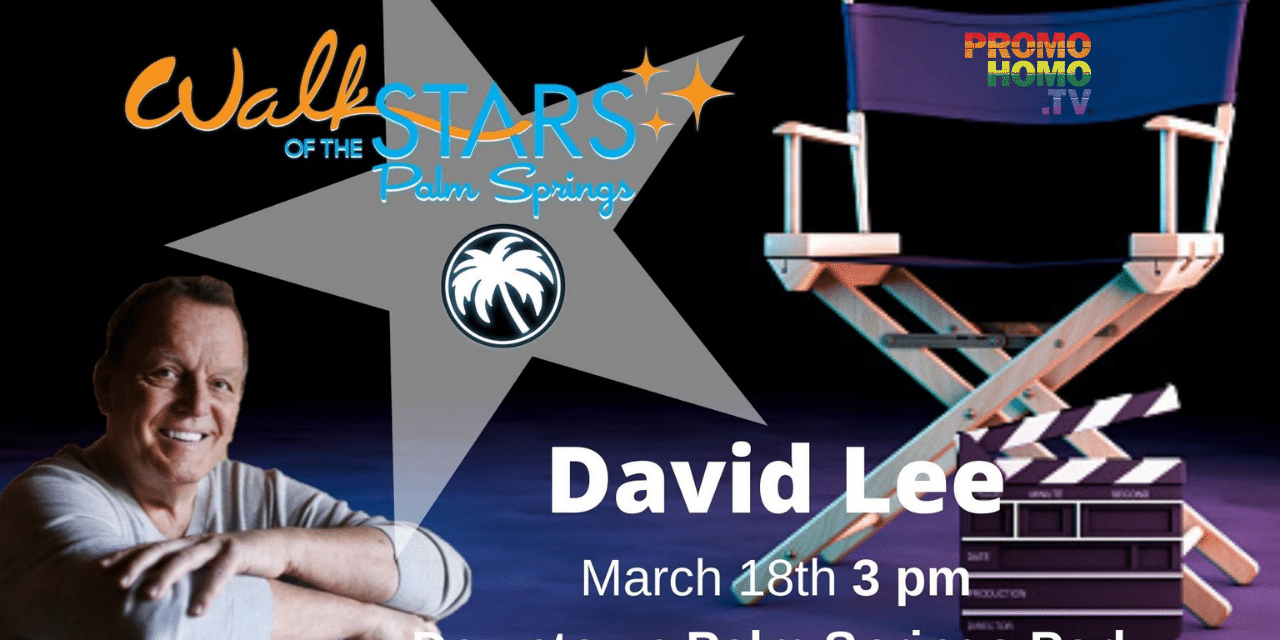 “We are so honored to host the star dedication for this amazing nine-time Emmy award-winning director, producer, and writer. David Lee is a true Palm Springs star.” said Nona Watson, CEO of the Palm Springs Chamber of Commerce.

David Lee wrote and produced The Jeffersons and Cheers, and co-created, wrote, and directed Wings and Frasier. He lives in Palm Springs, and he is very active in local philanthropic endeavors.

He is a passionate supporter of the arts in Palm Springs including Palm Springs Art Museum, Annenberg Theater, One Night Only, Coyote Stageworks, Desert Rose Playhouse and Dezart Performs. He recently founded The David Lee Foundation which aims to support, enhance, and promote professional theater in Southern California. Lee also contributed a substantial donation to the Plaza Theater Restoration Fund.

“I have loved Palm Springs for most of my life. It is nice to finally have evidence the feeling is mutual.” said David Lee.

About the Plaza Theatre Restoration Project

The City of Palm Springs recently launched a campaign to raise capital to fully restore one of its most iconic buildings – the historic Plaza Theatre. Originally built in 1938, it was used for film premieres and screenings, nationally broadcast radio theatre programs, and other performances. In its later years, the theater was home to the long running “The Fabulous Palm Springs Follies.” Over the decades, the building has deteriorated, so the City of Palm Springs has initiated a capital campaign to restore the beloved structure to its former glory.

The comprehensive restoration and rehabilitation plan will provide essential infrastructure repairs, installation of new theatrical equipment, and structural improvements to ensure that the building meets today’s fire prevention and American Disabilities Act mandates. This historic theatre has played an impressive role in Palm Springs much like the Radio City Music Hall has in New York. When the restoration is complete, the Plaza Theatre will be poised to continue to provide the city and its visitors with top notch entertainment for years to come.

Seminal Palm Springs architect Harry Williams designed the theatre in the Spanish Colonial Revival style. The theatre opened in 1936 with the premiere of the George Cukor film, “Camille,” with its legendary star, Greta Garbo, who allegedly slipped into the back of the theatre after the lights went down. Garbo’s co-star in the film, Robert Taylor, attended with Barbara Stanwyck.

Over the years, the theatre was the venue for memorable performances by entertainment giants Bing Crosby and Frank Sinatra. Performers Jack Benny, Bob Hope, and The Edgar Bergen and Charlie McCarthy Show broadcast live radio shows from the Plaza, bringing national attention to Palm Springs. It also was one of the most popular movie theatres in the growing Palm Springs community and was the venue for a number of motion picture world premieres, including “My Fair Lady” and “Music Man.”

In the late 1980s Sonny Bono created the Palm Springs International Film Festival at the Plaza Theatre. In 1991, a vaudeville-type revue called “The Fabulous Palm Springs Follies” launched and ran there for 23 years. The long-running show brought international exposure to the theatre and in many ways helped revitalize downtown Palm Springs.

The Plaza Theatre was declared a Class 1 Historic Site in 1991. This designation prohibits any structural changes that do not adhere to the original design. The theatre is in dire need of repair and restoration and the City of Palm Springs is committed to bringing it back to its original luster as the heart of the City.

Inspired to make a donation? All contributions are tax-deductible to the extent allowed by law. For more information or to make a donation to support preservation and restoration, visit SaveThePlazaTheatrePS.com.

Subscribe for as little as $10/month. Subscribe BEFORE April 24th, 2022 for an exclusive invite to PromoHomo.TV® Producer/Host Nicholas Snow’s 60th Birthday Party at EIGHT4NINE Restaurant and Lounge. Subscribers who can’t make it will be offered a link to connect virtually ON-CAMERA to a LIVE BROADCAST during the celebration