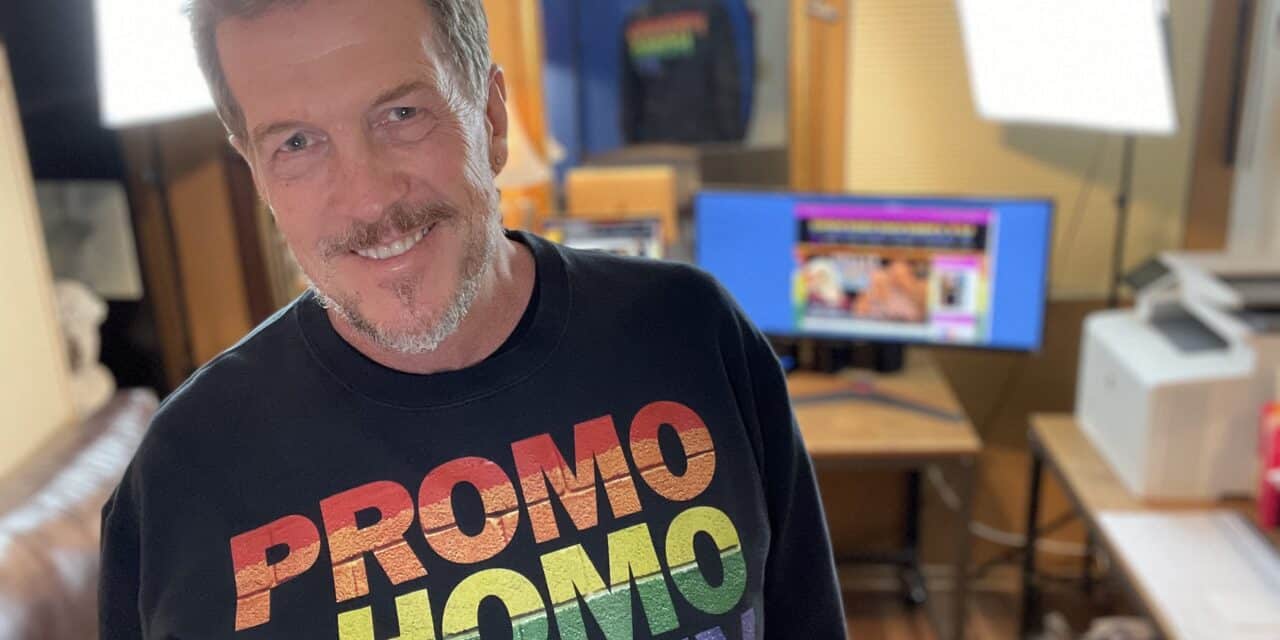 What began as Facebook Live broadcasts in 2016 has evolved into a full-fledged online television network with multiple broadcast television-style series created for a global audience, streaming to hundreds of thousands of viewers on YouTube, Facebook, LinkedIn, Twitter and at www.PromoHomo.TV

Almost a year ago on an unseasonably cold and windy night in Palm Springs, California, a crowd of big-hearted philanthropists, community leaders, politicians, healthcare providers and others gathered for a groundbreaking ceremony for the second affordable housing complex on the campus of DAP Health, “the Coachella Valley’s primary not-for-profit resource for those living with, affected by, or at-risk for HIV or AIDS.”

At this event, Nicholas Snow, who for over a decade has been a grateful client of DAP Health and a resident of their first affordable housing complex (where he has a broadcast studio in his bedroom), was invited to share his story. He chose to bare his soul, revealing in detail, “The Powerful True Story of a Decade that May Have Never Happened.”

“The last four decades did not happen for so many people we still carry in our hearts. In the early 1980s, knowing and loving people who lived with and died of AIDS forever changed the trajectory of my story,” revealed Snow. “They taught me, ‘Life is precious.’ And life could be, my life may be, very short. They challenged me to make every moment count, to make my life matter, to make it all mean something.”

In 2016 when Facebook Live video streaming was enabled on smart phones, in an “aha” moment, Snow began broadcasting under the brand PromoHomo.TV®. His first major event coverage of White Party Palm Springs reached thousands of viewers in just a few days.

During California’s shelter in place phase when he was sequestered at home in the early months of the coronavirus pandemic, Snow set out to realize his vision of expanding PromoHomo.TV® into a full-fledged online television network with multiple broadcast television-style series created for a global audience. This expansion was timed with the celebration of Global Pride in June 2020, a virtual event due to the pandemic. Snow’s inaugural live broadcast included panelists from around the world.

The urgency in the fight for equality (for everyone) has powerfully informed the PromoHomo.TV® editorial mission of “Connecting the Circuitry of Humanity by Creating Programming for LGBTQ+ Everyone.” His personal mission statement, as he explains, is “to honor and express my creativity in a way that makes a difference.”

Recent PromoHomo.TV® broadcasts included a tribute to Leslie Jordan the day after he died; a World AIDS Day special focusing on Rapid Start (the process in which a person with HIV rapidly starts Antiretroviral Therapy (ART = HIV medications); a candlelight vigil for the Club Q shooting victims; an episode focused on Indigenous People’s Day honoring the contributions of Native Americans; a preview of Brothers of the Desert’s Annual Wellness Summit for black gay men and their allies; the Will Rollins and Christy Holstege combined election night event; the historic swearing in of Grace Garner as Palm Springs’ first Latina mayor; and more. In 2022, PromoHomo.TV® also broadcast the complete pride parades taking place in West Hollywood, Los Angeles, Long Beach, San Diego, and Palm Springs.

For now, all the series are produced and hosted by Snow, but as the network grows, his vision is to lead a large creative team and perhaps collaborate with a major television network. Think Netflix. 2023 programming kicks off live 6:00 PM PST, Monday, January 9th, with a preview of the upcoming season; historic clips from Tinseltown’s Queer; and a new interview with historic queer icon Robin Tyler.

How, exactly, is Snow accomplishing all of this?

On top of continuing to expand his own skill set, he’s invested his inheritance and a small business loan. He received pandemic assistance and has worked freelance and temporary jobs. And even though the PromoHomo.TV® audience is worldwide, since Palm Springs is a world-renowned travel destination, PromoHomo.TV® is sponsored locally by DAP Health (except for any political programming), as well as EIGHT4NINE Restaurant & Lounge owned by his longtime friends Willie Rhine and John Pascal.

Snow also has partnerships with longtime friends and fellow media entrepreneurs Matt Skallerud and Fabrice Tasendo, who own Pink Media and amplify Snow’s programming across Twitter with the #ILoveGay campaign; Brad Fuhr, owner of KGAY 106.5 Palm Springs and GayDesertGuide.LGBT; and David Perry and Alfredo Casuso and their company, David Perry and Associates, a marketing and communications firm.

Just as other Creators use crowdfunding platforms to support their film and television projects, Snow encourages viewers to donate in support of the free programming choosing a voluntary paid subscription in the amount of their choosing. Patrons are proclaimed PromoHomo.TV® Superstars. Join them at www.Patreon.com/PromoHomoTV and discover them at www.PromoHomo.TV/Superstars.