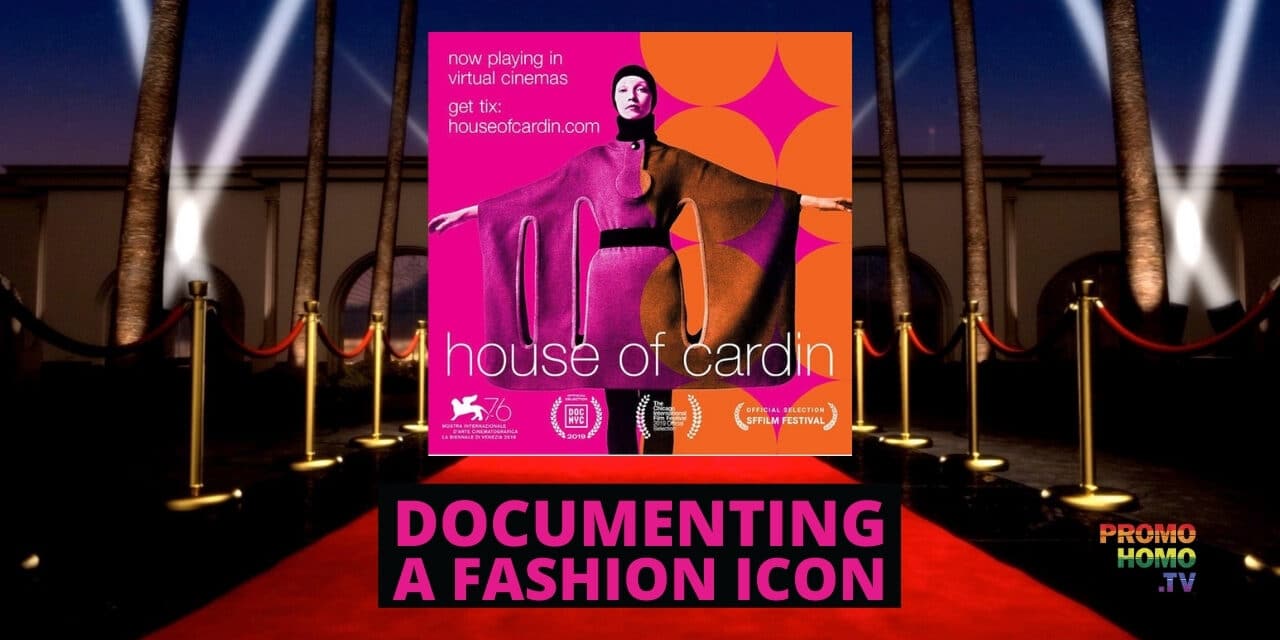 HOUSE OF CARDIN is a rare peek into the mind of a genius, an authorized feature documentary chronicling the life and design of Pierre Cardin.

“A true original, Mr. Cardin has granted the directors exclusive access to his archives and his empire, and unprecedented interviews at the sunset of a glorious career,” explain the filmmakers. 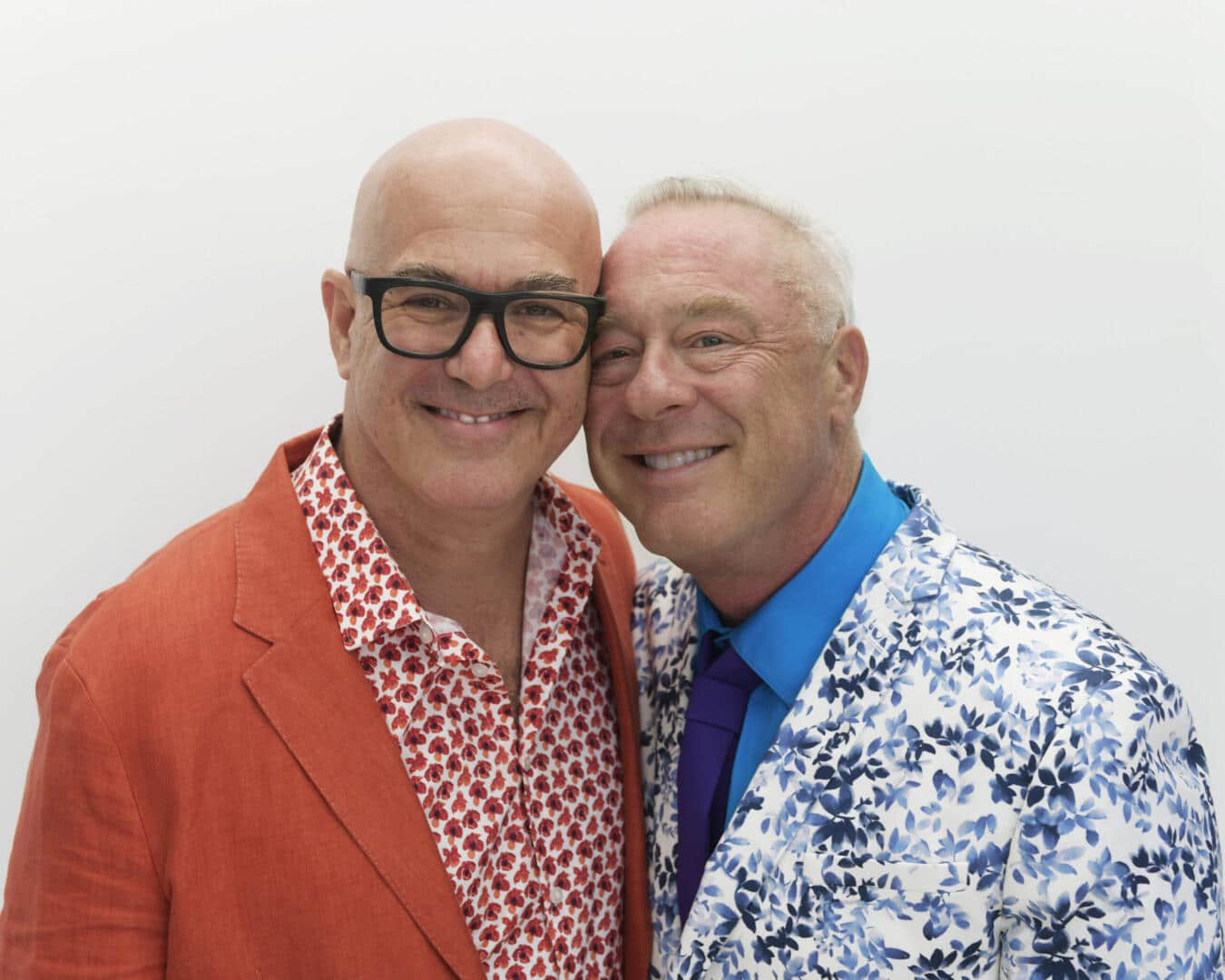 In this episode of #NotesFromHollywood on PromoHomo.TV, Producer/Host Nicholas Snow gets up close and personal with the film’s directors, P. David Ebersole (left, in photo) & Todd Hughes (right).

They explain, “Making HOUSE OF CARDIN has been the adventure of a lifetime. It is no easy task to fit a 97- year life into a 97-minute film. We have traveled around the world, following in his footsteps, where we discovered he was the first to seek to unite diverse cultures and people through the line and the cut of fashion.”

“Millions know the iconic logo and ubiquitous signature but few know the man behind the larger than life label,” they continue. “Ultimately we seek to answer the question: Who is Pierre Cardin? What is the story behind this legendary icon?”

The documentary goes into wide VOD (Video on Demand) release timed with this broadcast, September 15, 2020. 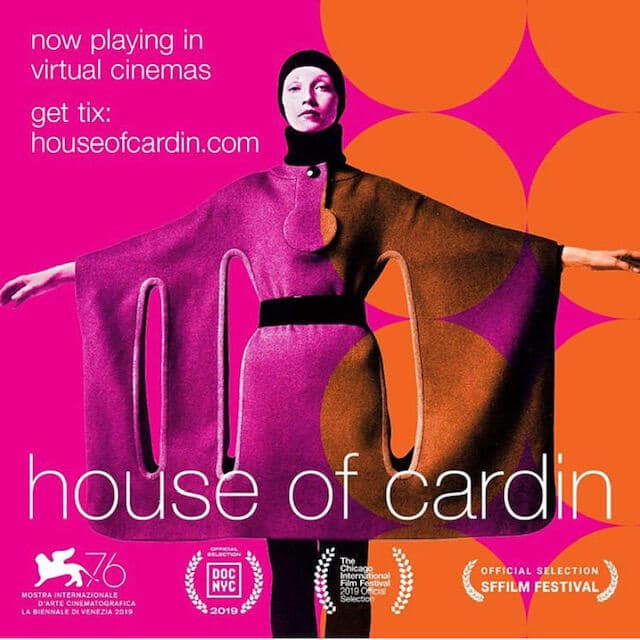 STATEMENT FROM THE DIRECTORS

We are Cardinophiles. When we started to decorate our house five years ago we made a remarkable discovery: Pierre Cardin, who we had only known as the maker of our adolescent cologne, was also the maker of beautiful and sophisticated modern furniture. As we began to collect extraordinary Cardin pieces, we got more and more interested, finding an entire new world of not just furniture but lifestyle.

Fate was with us, and in the summer of 2017 we met the mythic man himself. Cardin has never wanted a biography written about him and had refused all offers of a documentary. That is, until we looked into each others’ eyes, and like he had done many years previously with Jean Paul Gaultier and Phillippe Starck, said yes to us on the spot. “When do you want to start?”

Making HOUSE OF CARDIN has been the adventure of a lifetime. It is no easy task to fit a 97- year life into a 97-minute film. We have traveled around the world, following in his footsteps, where we discovered he was the first to seek to unite diverse cultures and people through the line and the cut of fashion.

Our cast was a dream, and though peppered with some very large personalities, surprisingly easy to secure. We had noticed that Naomi Campbell was one of the handful of current stars to wear vintage Cardin on the red carpet. We reached out to her and she said yes immediately, our first celebrity interview; and when she slipped on a 1969 Cardin target dress to wear on camera, our whole set swooned. Sharon Stone was a well-known friend of Jeanne Moreau, as the two had appeared on the cover of Paris Match together. We thought she could talk about the Moreau/Cardin relationship but discovered that Pierre Cardin had picked her out of a crowd when she was a young model and told her she was something special. She eagerly agreed to an interview and to wear vintage Cardin that was flown in from his museum in Paris. Jean-Paul Gaultier was perhaps the most difficult to lock in, but only because of his busy schedule and his desire to not just squeeze us in between appointments, but rather to give us a full, thoughtful two-hour interview. It was mind boggling to discover that Cardin had touched so many notable people, and that they all held him in such high esteem. When research revealed that musicians Jean-Michel Jarre, Alice Cooper and Dionne Warwick had all played at the Espace Cardin during its 52 year run, email inquiries were returned in record time with great enthusiasm to participate in the documentary, and all delivered uniquely interesting anecdotes, with a fierce admiration and respect for Mr. Cardin.

It is impossible to catalog all of his work and achievement, but we have tackled the challenge of asking the key question that guided us through out: “Who is Pierre Cardin?”

We are ecstatic that we were able to complete and premiere the film at the Venice International Film Festival, where Mr. Cardin was gracious enough to be in attendance, and in the city of his birth. More importantly, he stood up in the theater after seeing the finished product for the first time, to talk to the crowd who surrounded him with a standing ovation and said, “It’s all true!” It was better than winning an Academy Award.