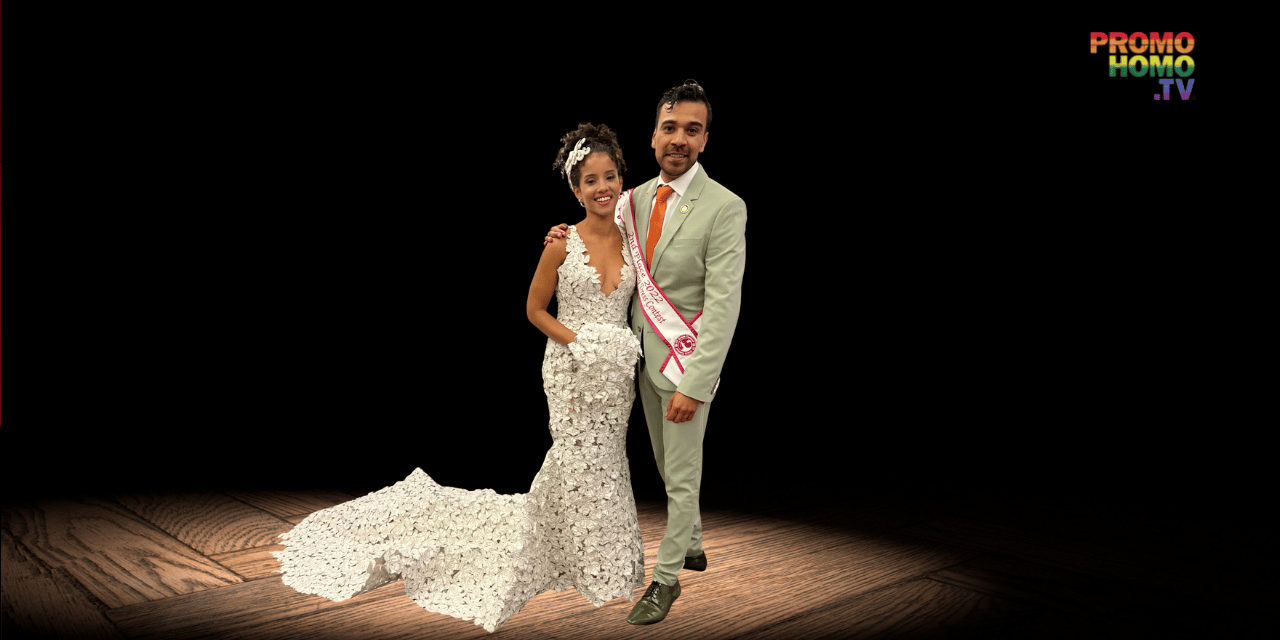 In this episode of PromoHomo.TV®, Producer/Host Nicholas Snow welcomes renowned Palm Springs-based costume and fashion designer Frank Cazares, celebrated for his imaginative use of unconventional materials and a fine eye for detail. Frank has been a finalist in the national Toilet Paper Wedding Dress Contest for several years (capturing 2nd place in 2022, including a $5,000 prize) and was a featured contestant on the Toilet Paper Wedding Dress Challenge on TLC in 2019. 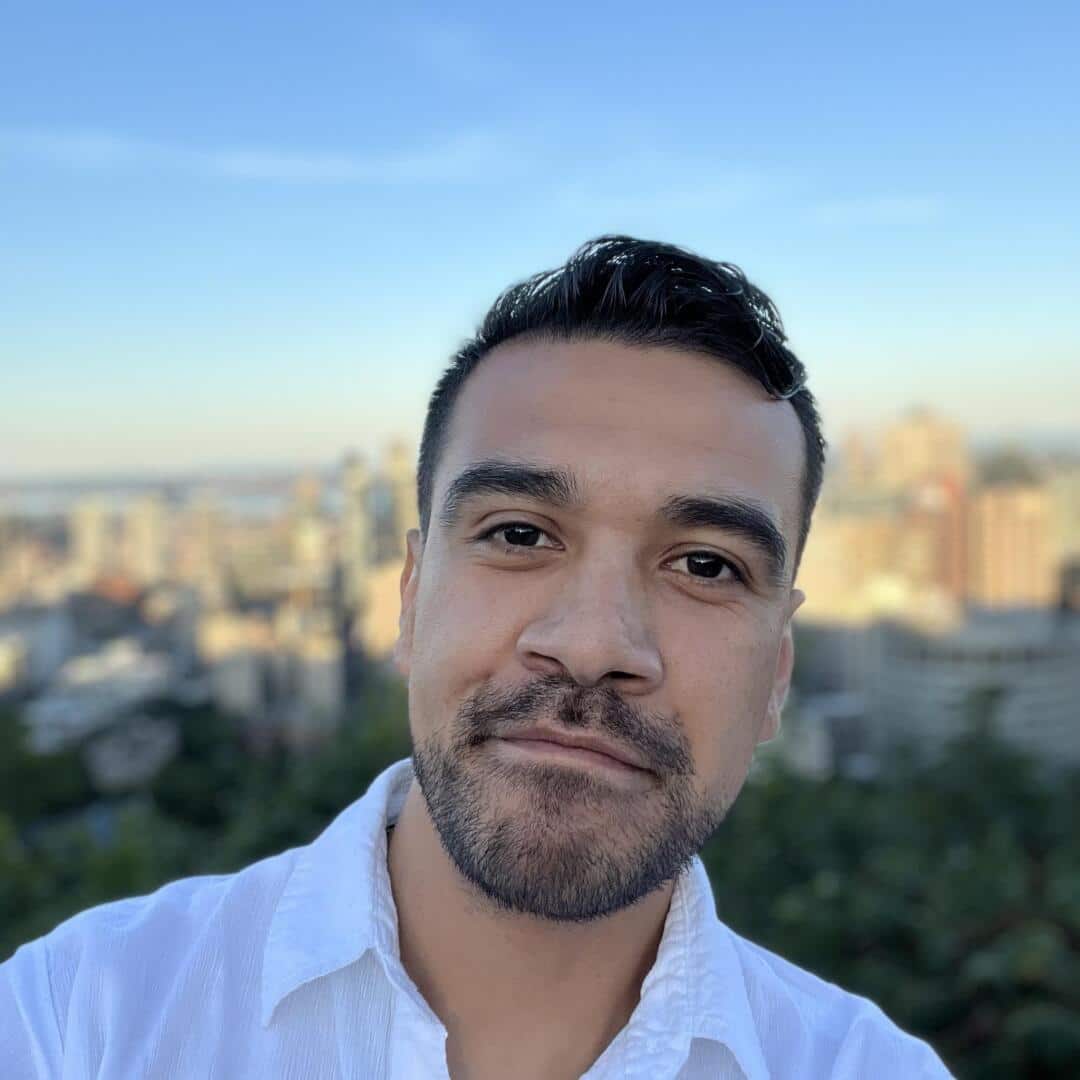 “Frank’s creative process has always begun with investigation, a joyful exploration of what has come before, traditions, their underlying meanings, and riffs on those traditions,” state his official bio. “He is both restrained and bold — seeking to understand and appreciate the power of an underlying object or material, and then bringing his creative energy to bear to unleash its essence in dramatic ways.  Frank’s imaginative and technical skills are displayed in a series of couture wedding dresses, made solely from glue, tape, thread and…toilet paper!”

Frank envisioned haute couture, pushed the possibilities that these material offer, and transformed them into a dazzling array of elegant, wearable, themed celebrations of a bride, which are featured on TLC’s “The Toilet Paper Wedding Dress Challenge.”

Competing designers create a Toilet Paper Wedding Dress and Headpiece using only Toilet Paper, Tape, Glue and Needle and Thread. The dresses and headpieces are judged on Beauty, Creativity, Originality, Workmanship, and the Use of Toilet Paper.

This year Frank placed second out of 1,575 entrees and took the award for fan favorite with 24,000 votes! Frank also recently received a grant from the 1/52 project where he was named one of Broadway’s next generation of costume designers by current Tony-nominated and winning designers. Work experience includes Walt Disney Entertainment, Royal Caribbean Entertainment, independent feature films, and regional theatre companies. 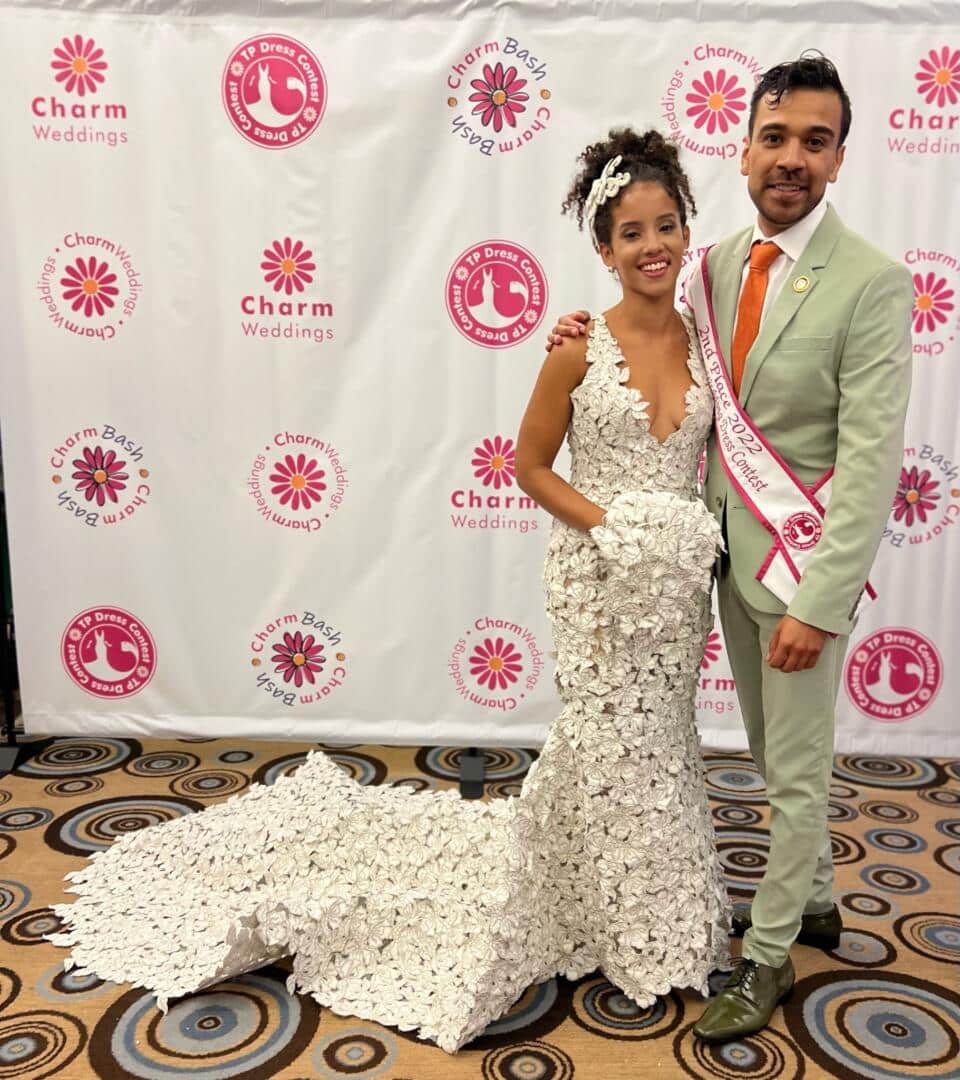 Frank Cazares is a California-based costume and clothing designer with a unique eye and sensibility developed from a lifelong love of the history of fashion, art, and film. As an artist and costumer, Frank has worked for a number of entertainment companies and theaters including The Disney Company, Royal Caribbean Cruise Lines, Costume World, and the Coachella Valley Repertory Theater.

Since childhood, Frank, who grew up in Austin, Texas and Orange County, California, has been fascinated by the details of fabric design — building a deep understanding of the materials and construction techniques to unleash their intrinsic essence and movement. This fascination with the details allows Frank to design and construct costumes that are true to, and organically flow from, their sources. He has always been drawn to the visual and the craft that makes it come to light and life — how did that design develop, what are the sources, how was it executed, what were the alternatives ways to express the ideas, how effective is the design at conveying meaning.

Some of Frank’s inspirations include —

—the dense, symbolism-filled and mysterious setting and costumes from age-old fables and tales of from Western, Eastern, and Indigenous cultures;

—the magic moment in “The Wizard of Oz’ when Dorothy is transported from the confines of black and white life to an explosion of color and opportunity;

—the imaginative and boundary-breaking designs and clothing of Alexander McQueen, with their bold colors and ingenious mix of disparate materials.

The thousands of hours of handwork, embroidery, and stenciling show the excellent technical skills which Frank has learned and developed over 20 years and countless pieces.

While Frank enjoys his solo projects, he also delights in working collaboratively with artist, designers, production designers, directors, and producers, to bring their visions to life, enhance the vision and meaning of their productions with the right costume designs and choices. Capable and self-sufficient if given the task to do it on his own, Frank most enjoys the creative energy springing from the interaction of talented artists.

For more on Frank, www.frankcazaresdesigns.com