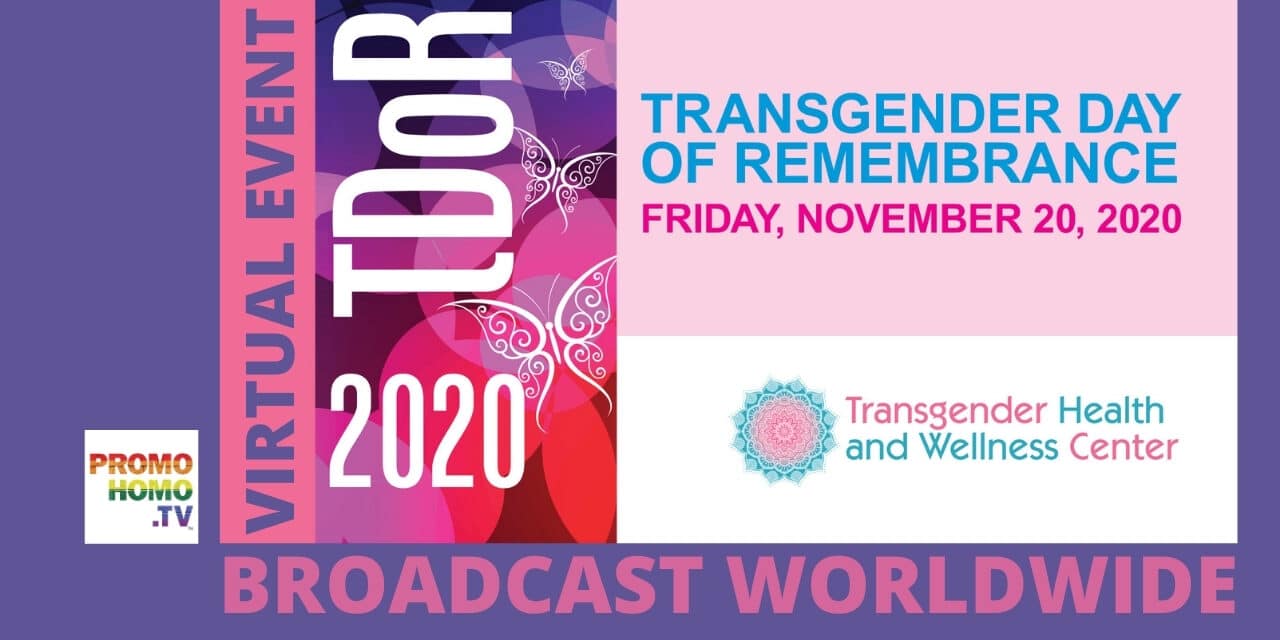 With apologies, due to technical difficulties during the original live broadcast, there is no audio during the first four minutes 40 seconds of the video.

In keeping with pandemic protocols, an annual TDoR observance in Palm Springs, California, championed by the Transgender Health and Wellness Center, is primarily virtual in 2020, broadcast by PromoHomo.TV across multiple social media platforms. Participate in this live, or on demand, from anywhere in the world. (Any in-person participants are following strict pandemic protocols).

A Important Message from the Transgender Health and Wellness Center

“A transgender-led organization receives an average of 0.015% of each dollar donated to LGBT organizations. The transgender community remains the highest statistic in unemployment, job discrimination, harassment, murder, HIV diagnosis and suicide. To change this, we must begin supporting trans-led organizations that invest the most back into this marginalized community.

Services that we provide, produce revenue for direct support to the less fortunate in the transgender, gender non-conforming and intersex community. We provides emergency clothing for LGBTQ+ abused foster children seeking new placement, emergency clothing for those kicked out for who they are, transitional clothing, name and gender change assistance, emergency hygiene supplies, pet and human food, free mental health and much more.

For-profit businesses that provide medical services, laser hair removal and electrolysis are only concerned with making a profit and give the least back to that marginalized community. Choosing who you support directly impacts the entire community and helps create the structure and models or more trans-led organizations to thrive.”

“Transgender Day of Remembrance was founded in 1999 by Gwendolyn Ann Smith, a transgender woman, to memorialize the murder of transgender woman Rita Hester in Allston, Massachusetts. It has slowly evolved from the web-based project started by Smith into an international day of action. In 2010, TDoR was observed in over 185 cities throughout more than 20 countries.

Typically, a TDoR memorial includes a reading of the names of those who lost their lives from November 20 of the former year to November 20 of the current year, and may include other actions, such as candlelight vigils, dedicated church services, marches, art shows, food drives and film screenings.”

Watch, listen and be inspired.