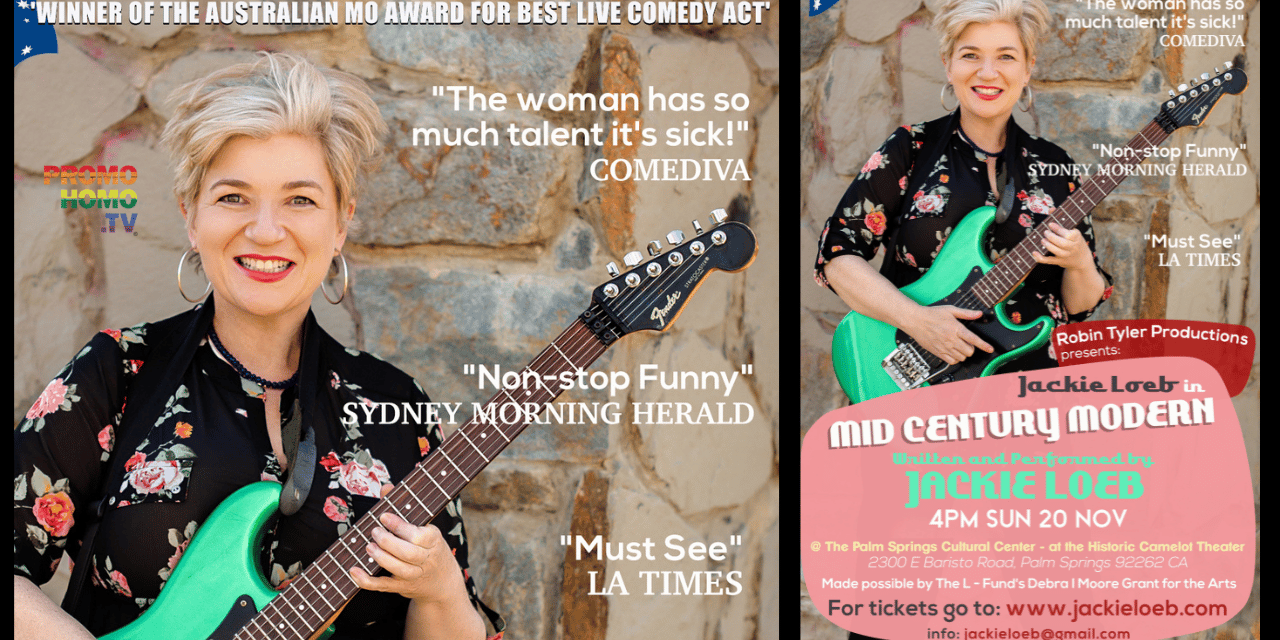 In MID CENTURY MODERN… “Our heroine, Jackie Loeb is in limbo. Caught between the old-school, cigarette stained, dump your rubbish in the ocean, wolf-whistling-bum-pinching world AND the low carbon emission, farm to table, plant-based, cruelty free and hemp infused world we live in today.

On November 20th at 4:00 PM at The Palm Springs Cultural Center, Jackie must navigate her way out of the asbestos-based, factory farmed non- biodegradable world TO the energy efficient, ergonomic all-inclusive yet completely polarized hybrid new world. If she fails to find a hydrogen fueled vehicle to make this journey in, Jackie risks being recycled, repurposed, erased and possibly canceled.

Will Jackie be able to learn, grow, evolve, and have her own digital virtual ETSY shop or will she remain stuck in the fossil fueled analogue processed deli-meat world in which she was born?

Pack up your green smoothie, there’s a show to go see.”

Winner of The Australian MO Award for Best Live Comedy Act, Jackie Loeb is a comic, actor, singer, writer and world-renowned sugar and carb addict! As seen on Superstore, Better Things, The Comedy Channel and can currently be heard on the Emmy Nominated Netflix animated children’s series Trash Truck where she voices the role of Ms. Mona. (A worldly and wise Australian rat.) Jackie was also a writer and cast member on the iconic sketch comedy series Full Frontal.

Jackie has worked as a stand-up comic her entire adult life and has headlined at comedy clubs across Australia and beyond. She has hosted events for Kids Help Line, Weight Watchers, The LGBTQI Awards, Soccer NSW, University of New England, and Jack Daniels just to name a few.

PromoHomo.TV® is “Connecting the Circuity of Humanity” by “Creating Programming for LGBTQ+ Everyone.” All programming may be streamed worldwide for free, but you are encouraged to become a PromoHomo.TV® Superstar by voluntarily subscribing for as little as $10/month. (Newsflash…. There’s now a “Holler for a Dollar” level at only $1.00/month, or you can join the Sticker Squad for only $3.00/month, but the most popular category is the Skip-A-Latte Club at only $10.00/month).  Or simply send a tip via Venmo to @PromoHomoTV.