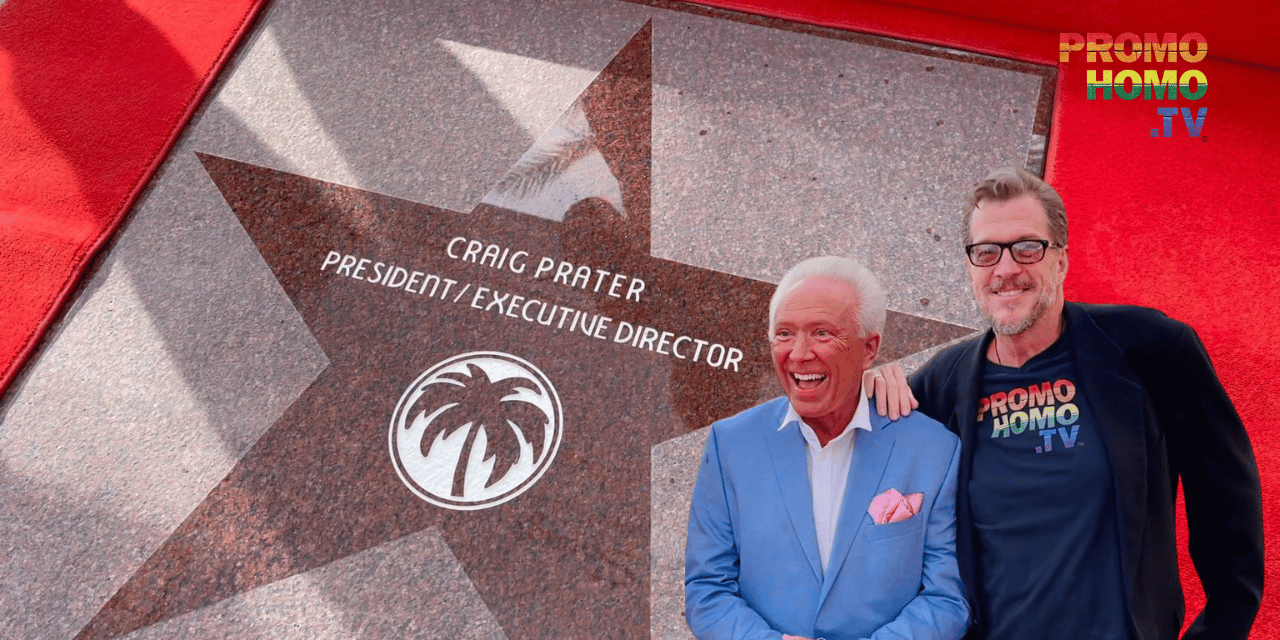 The City of Palm Springs and the Palm Springs Chamber of Commerce presented Craig Prater, former Executive Director of the Palm Springs International Film Festival, with the 454th star on the WALK OF STARS on January 5, 2023in downtown Palm Springs, California (his star is a few yards North of the Forever Marilyn statue at Belardo and Museum Way).

Longtime friend of Prater’s, Nicholas Snow – creator of Notes From Hollywood® and PromoHomo.TV® – captured the most comprensive coverage of the day, and presents the star ceremony and celebratory speeches in full.

Prater began working with former Palm Springs Mayor and U.S. Congressman Sonny Bono as the executive director of the internationally-renowned film festival in 1993. Founded in 1990, 34 years later the Palm Springs International Film Festival is ranked among the world’s best film festivals and a successful predictor of Academy Award honors.

During his tenure as festival director from 1993-2000, Prater had worked with city officials and Walk of Stars founder, Gerard Frenzel, to secure placements of stars for a list of high-profile film stars including Sophia Loren, Mickey Rooney, Debbie Reynolds, Roberto Benigni, Catherine Deneuve and James Earl Jones.

Acknowledging this full-circle moment, Prater stated, “After assisting the Walk of Stars board of directors for so many years, it’s humbling to be receiving a star of my own in the town that I love.”

Following his long and successful tenure at the Palm Springs film fest, Prater continued his festival career in Bangkok, Thailand where he worked with the Royal Thai government; followed by other international events for Greek, Latino and Jewish film festivals. He completed his film festival career after serving a 5-year term in 2021 as President/CEO at Heartland Film in Indianapolis, Indiana.

Prior to Prater’s international film festival career, he also had a successful business career serving as Director of Show Production for Redken Laboratories which became Redken Fifth Avenue by L’Oreal. For Redken, he produced and directed seminars throughout North America with two international events at New Orleans’ Superdome and at Lowe’s Monte Carlo in Monaco.

Prior to being tapped by Sonny Bono to serve as Executive Director of the Palm Springs International Film Festival, Prater served as the Development Director of the Desert AIDS Project. During his term at DAP, he secured the international HEARTSTRINGS program as a fundraiser that featured top ranking celebrities; he also produced the successful fundraising event featuring Dionne Warwick at the famed Elrod House, the Palm Springs film location where a scene in the 1971 Diamonds Are Forever James Bond film was shot.

Prater recently retired and returned to Palm Springs where he has previously resided for more than 30 years.

Creatives and those who love them are familiar with crowdfunding platforms used to offer perks to donors who support a film or television project. Similarly, to serve as the cornerstone for the long-term success of PromoHomo.TV®, Snow encourages viewers to donate in support of the free programming with a voluntary monthly subscription. He calls these donors the PromoHomo.TV® Superstars.