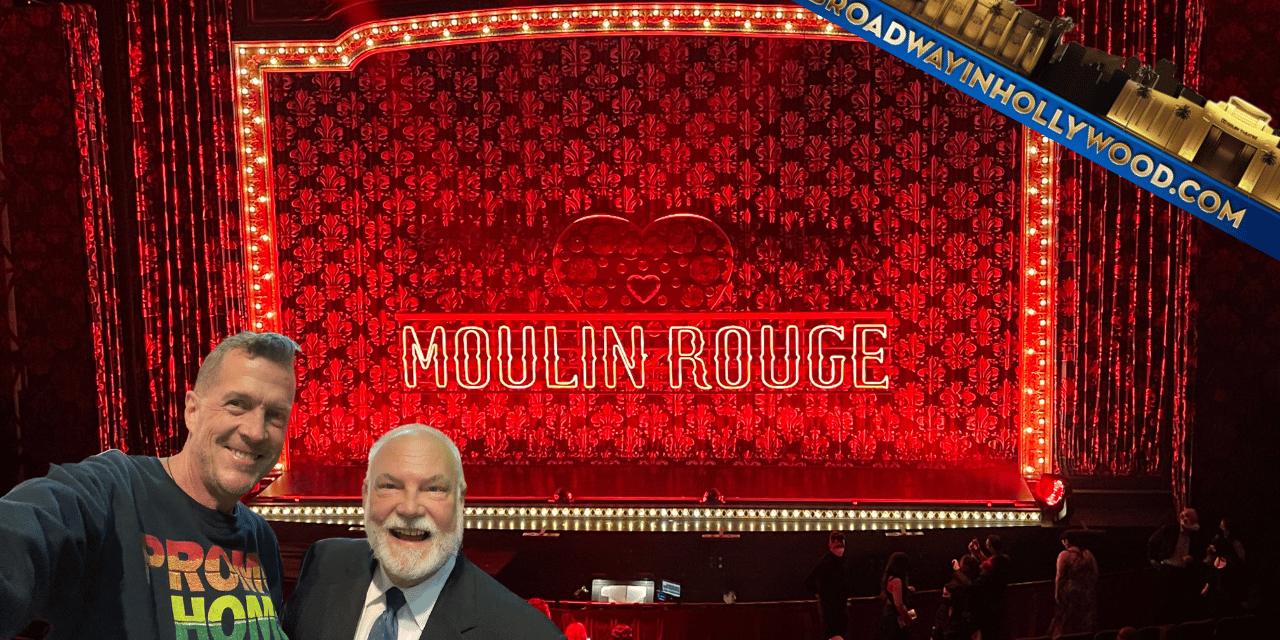 Moulin Rouge! The Musical opened to critical acclaim at the Al Hirschfeld Theatre in the Summer of 2019 and reopened in September 2021 following the shutdown of Broadway due to the pandemic.

Enter a world of splendor and romance, of eye-popping excess, of glitz, grandeur and glory! A world where Bohemians and aristocrats rub elbows and revel in electrifying enchantment. Pop the champagne and prepare for the spectacular … Welcome to Moulin Rouge! The Musical.

As in the film, Moulin Rouge! The Musical celebrates over 160 years of music – from Offenbach to Lady Gaga. The stage musical features many of the iconic songs from the movie, and also includes recent hits released since the movie premiered 21 years ago.

Moulin Rouge! The Musical is produced by Carmen Pavlovic and Gerry Ryan OAM for Global Creatures and Bill Damaschke. General management is by Foresight Theatrical.

Released by 20th Century Fox, Baz Luhrmann’s MOULIN ROUGE! premiered at the 2001 Cannes Film Festival. At the 74th Academy Awards, the film was nominated for eight Oscars, including Best Picture, and won two.

The Moulin Rouge of Paris, managed by Jean-Jacques Clerico (CEO), is a dazzling and spectacular universe, the symbol of the Parisian way of celebrating since 1889. Starting life as a popular cabaret and dance hall, the venue became an iconic music hall in the Roaring Twenties, and then a theatre where numerous famous French and international artists stepped out into the limelight. Today, the Moulin Rouge and its 60 artists present the Féerie revue show: two hours of amazement between cabaret and music hall styles where dance scenes and surprise acts intersperse – without forgetting the Moulin Rouge’s most emblematic dance, the French Cancan! Since its creation, the Moulin Rouge of Paris has always been an invitation to live and share all the emotions and effervescence of a unique party extravaganza. http://www.moulinrouge.fr/

…entitled SIMPLY THE BEST – the first full season announcement in two years, consisting of eight Broadway national tour productions which will play both the Pantages and Dolby Theatres in Hollywood.

Broadway in Hollywood President Jeff Loeb states, “Since reopening our doors to audiences this past August, the cheers resonating from our packed houses at both the Hollywood Pantages and Dolby Theatres remind us of one simple fact: L.A. theatergoers are ready for even more – and we’ve got more in store! How fitting that in the middle of Women’s History Month, we get to introduce to you all a brilliant lineup of shows featuring bold, inspirational, multi-faceted women from all walks of life. Broadway has returned Home to Hollywood, with a season that is SIMPLY THE BEST.” 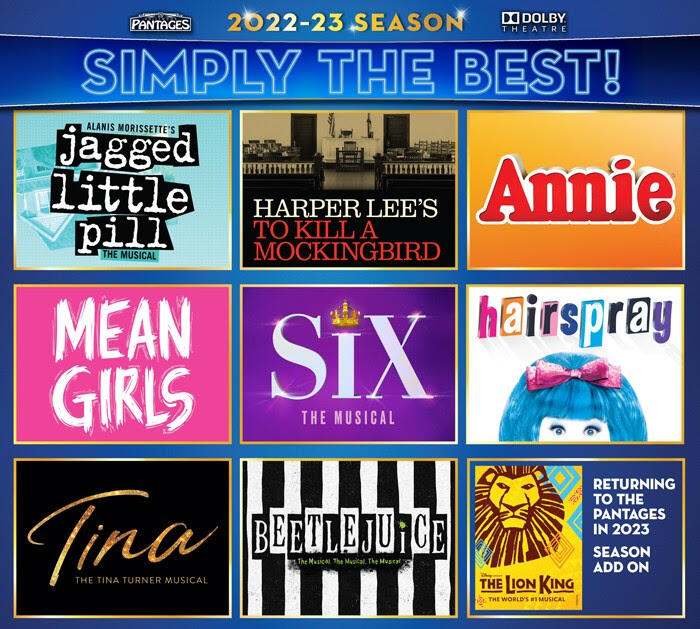 The Dolby Theatre will play host to two long-awaited, tried and true Broadway classics – both back by popular demand: ANNIE – the classic family Broadway musical, and HAIRSPRAY – featuring Andrew Levitt, known to audiences as Nina West (RuPaul’s Drag Race, Disney+ “This Is Me” Pride Celebration) as Edna Turnblad.

As an added bonus to their season announcement, Broadway in Hollywood and the Hollywood Pantages Theatre are proud to welcome home Disney’s THE LION KING, which returns after a ten year absence in Los Angeles. The production’s 2023 engagement marks the 4th Los Angeles engagement of this ground-breaking production at the Hollywood Pantages Theatre. More than 100 million people around the world have experienced the awe-inspiring visual artistry, the unforgettable music, and the uniquely theatrical storytelling of this Broadway spectacular – one of the most breathtaking and beloved productions ever to grace the stage.

About Broadway in Hollywood

About The Hollywood Pantages Theatre

The Hollywood Pantages is part of The Nederlander Organization, which owns or operates venues on Broadway and in Chicago, San Diego, San Jose, Tucson, Durham, Oklahoma City, N. Charleston, Greensboro, Washington D.C., and London. The Hollywood Pantages is the foremost theatre of first-class touring productions in Los Angeles. Presentations include Hamilton, Disney’s The Lion King, Wicked, The Book of Mormon, and The Phantom of the Opera.

About The Dolby Theatre

Opened in 2001, the 180,000-square-foot, 3,400-seat Dolby Theatre® with cutting edge technologies sets the stage for entertainment technology as a host of the world’s biggest movie premieres, events, and performances. Dolby Theatre is an ongoing showcase for the latest innovations in Dolby entertainment technology, including Dolby® Atmos™, a breakthrough audio technology that delivers a natural, life-like sensory experience. Dolby Theatre also features Dolby 3D, a state-of-the-art imaging solution that provides audiences with a superior 3D experience. Dolby Theatre is located within Hollywood & Highland®, which consists of over 640,000 square feet of space featuring national, regional and local retail tenants, a variety of restaurants, several of Hollywood’s hottest nightclubs, a six screen state-of-the-art cinema adjacent to the world-famous TCL Chinese Theatre and the 640 room Loews Hollywood Hotel.