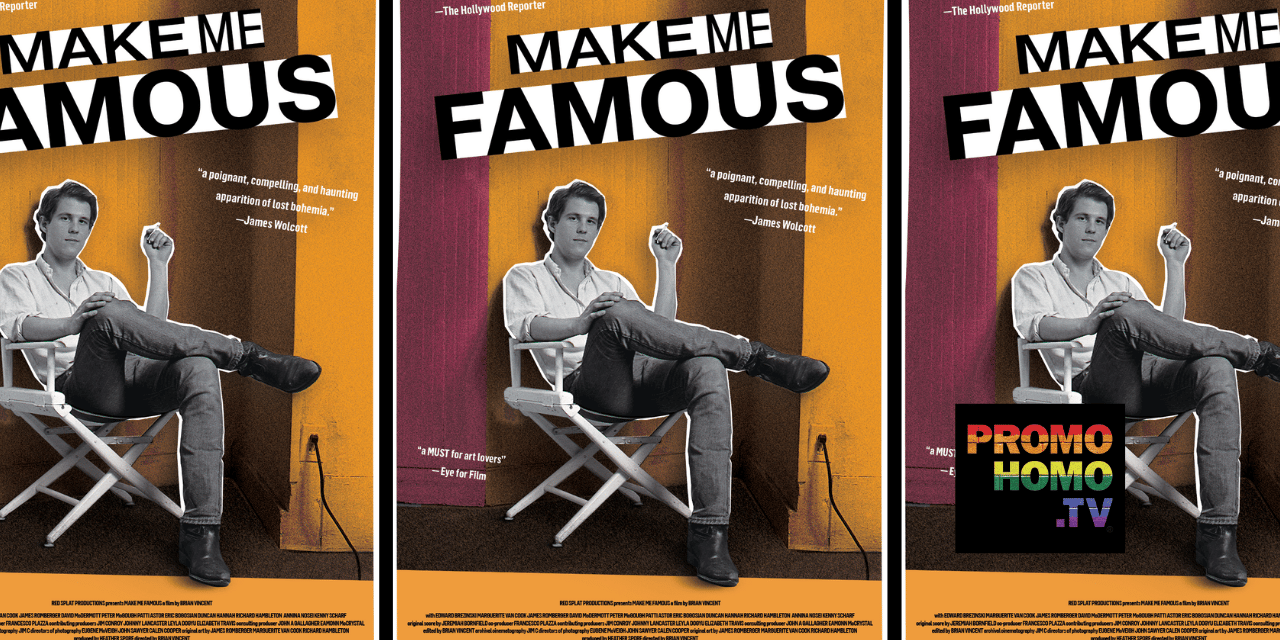 In this episode of Notes From Hollywood®, PromoHomo.TV® Producer/Host Nicholas Snow welcomes the film’s director, Brian Vincent, and producer Heather Spore, to discuss this “madcap romp through the 1980’s NYC art scene amid the colorful career of painter, Edward Brezinski, hell-bent on making it. Brezinski’s quest for fame reveals an intimate portrait of the art world’s attitude towards success and failure, fame and fortune, notoriety and erasure.”

The Architecture Design Art Film Festival (ADAFF) is presented by The American Documentary And Animation Film Festival during Modernism Week. The mission of the festival is to foster understanding and engage audiences, industry and decision-makers in architecture, design and the arts. With a view to urban and residential planning, the Architecture Design Art Film Festival (ADAFF) aims to build awareness and encourage alternative forms of design as well as retention by resuscitating historically significant creations.

MAKE ME FAMOUS brings forward a popular era while unearthing many artists, photographers, and stories that have seldom been in the public eye. The 1980s art scene is famous for breakout artists like Jean-Michel Basquiat and Keith Haring, but there were many other artists who made a powerful impact.

Set during arguably the last great art explosion in American history, MAKE ME FAMOUS tells the story of painter Edward Brezinski in his maniacal quest for fame. Told by the artists and gallery owners themselves, MAKE ME FAMOUS gives an intimate portrait of what it was like to be an artist in NYC in the 1980s, with an unexpected twist at the end when you find out what happened with Brezinski’s mysterious death in the Côte d’Azur. This feature art documentary delves into the spirit of the artists themselves, what drove their generation and what they were up against.

Director Brian Vincent states, ”As a Juilliard trained actor, my process for character study has always incorporated my own sketches to envision the characters I play. I have always been fascinated that unlike actors, artists have a greater capability to create on a whim. As Eric Bogosian states in the film, actors are always “waiting for the phone to ring. But in the art world, you can get up in the morning and say, what am I going to make today?” Brezinski’s art and his devotion to painting makes a lasting impression, but so too do the stories about his self-sabotaging, all-or-nothing attitude, and his impulsivity to react to hypocrisy. Wanting to succeed is a great motivator. To continue trying in the face of adversity is heroic. MAKE ME FAMOUS will make art history come alive for viewers and make the case that a life devoted to art is worth exploring.

With the support of the artists and photographers of the movement, the film is a rich time capsule of the ‘80s art world from a moment in time when creativity was the ultimate goal. Over seven hundred images have been compiled from the era. Original art was commissioned for the film by ‘80s artists Richard Hambleton, James Romberger and Marguerite Van Cook. MAKE ME FAMOUS brings together never before seen video archival from the ‘80s art world by Jim C. and clips of the era’s highly influential art films, “Downtown 81” and “Underground USA.” MAKE ME FAMOUS has an original New Wave score by Jeremiah Bornfield (“Hitchcock/Truffaut,” “Diane.”)

ArchitectureDesignArtFilmFestival/tickets with single tickets priced at $10 and festival passes can be purchased for $55. at this link.