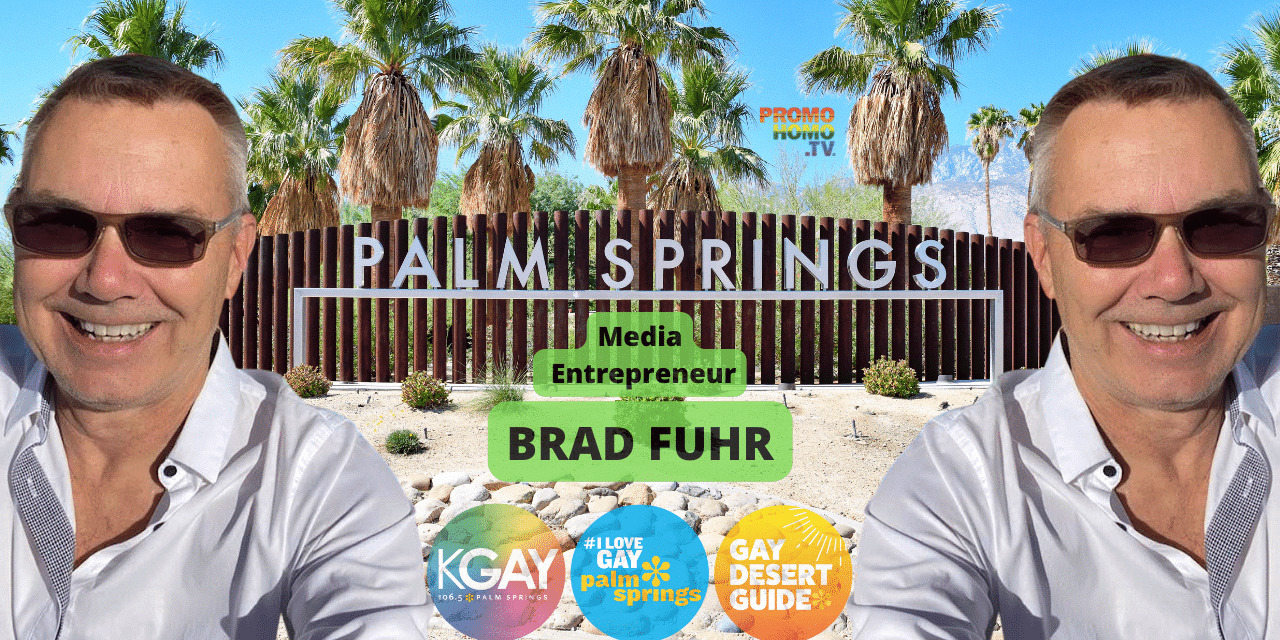 Jaws are undoubtedly dropping around the world as people discover on their smart speakers, KGAY 106.5 Palm Springs, headquartered in what could be called easily be called the LGBTQ+ Capital of the World.

At the helm of KGAY, and sister company Gay Desert Guide, is media entrepreneur Brad Fuhr. His current success is built upon decades of experience and commitment to making the world a better place.

Brad started his radio career with a fascination of the technical aspects of radio. He got his FCC Third Class license at age 14 and started at his hometown radio station, WBCH, on his 15th birthday.

Brad was graduated from Central Michigan University in 1979 and made his way to Stevens Point, WI., in 1980 working for legendary Billboard Station of the Year WSPT. He worked his way up to program director, a position he held at a number of Midwest radio stations throughout the 80s and early 90s. He programmed, then managed a start-up radio station in Northern Michigan, WLTO, Harbor Springs, with a non-traditional Americana format. This was Brad’s first general manager position.

He became general manager of WPGU-FM, the commercial student-run station at the University of Illinois from 1992-1995. “The Planet” was the highest-rated Alternative rock station in America during his tenure and helped launch dozens of successful radio careers for his student staff. The station’s revenue increased to over $450,000.

Brad went to the digital side working with Bonneville Radio Group and Emmis Interactive in Chicago in the late 90s and early 2000’s. He connected with radio personality Harrison and helped launch Sirius OutQ from Los Angeles in 2002.

Brad moved to Los Angeles full-time in 2005, working for Clear Channel radio KTLK AM 1150, KBIG and I Heart Media’s Pride Radio channel. At KTLK, he increased revenue to $5.5 million. While at KBIG, he sold a group deal to T-Mobile using end of year co-op dollars for a $1.2 million two-week campaign. Brad then returned to Emmis Interactive before the company was sold to Marketron in 2012. He was consulting Palm Springs Life and owned property in Palm Springs when he started the LGBTQ website, GayDesertGuide.com, in 2013.

Brad began teaching as an adjunct professor in the Fall of 2013, assisting with KCOD. It was a way to supplement his income while the new business ramped up. He helped engineer and concept the rebranding to CoachellaFM in Fall 2014.

Brad has worked with publishing companies, consulting Los Angeles Magazine, Palm Springs Life, San Diego Magazine and LGBT title, Frontiers Magazine, on their digital media and sales strategy. It was that experience that gave him the light-bulb moment for his LGBTQ-centric business. He launched GayDesertGuide.com on Labor Day weekend 2013 and is the e-publisher and president of the company.

He took over KGAY 106.5 Palm Springs in August of 2021 and purchased it on January 1, 2022 under a California Benefit Corporation.

PromoHomo.TV® is a viewer-supported network. Subscribe for as little as $10/month.

Subscribers who can’t make it will be offered a link to connect virtually ON-CAMERA to a LIVE BROADCAST during the celebration.