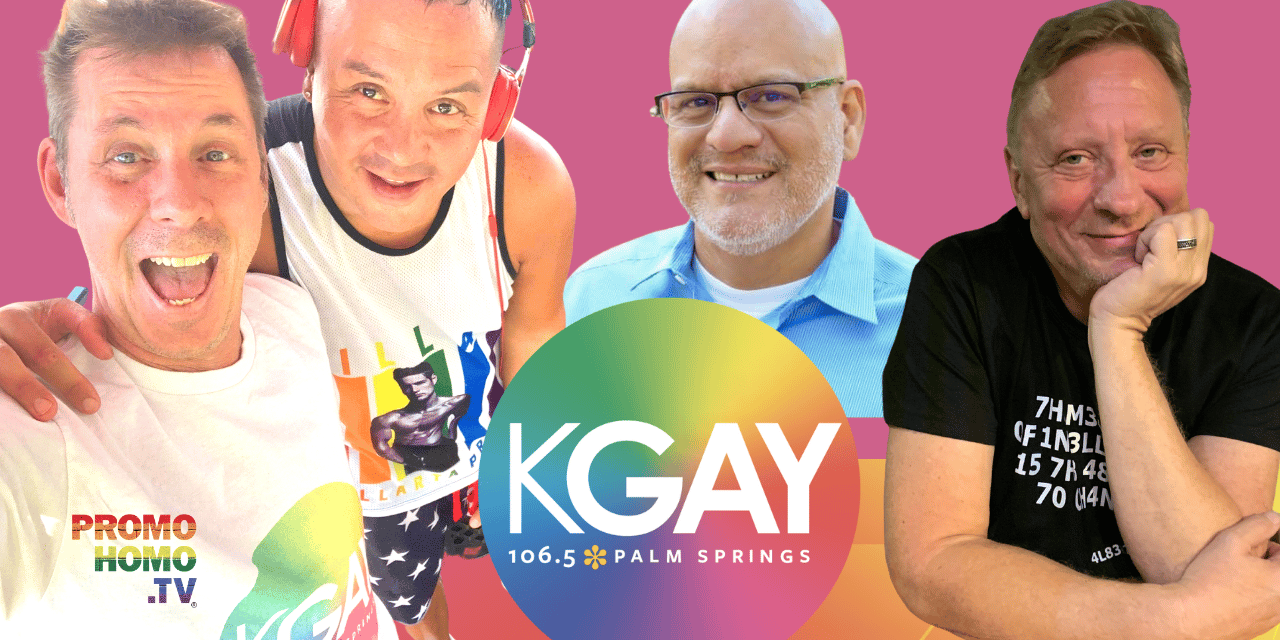 KGAY 106.5 Palm Springs, known as Pride of the Valley, is capturing listeners all over the world and is the most listened to LGBTQ+ station in the Greater Palm Springs media market. So, PromoHomo.TV® Producer/Host Nicholas Snow – a media partner of KGAY, wanted to give the hit station’s on-air personalities some on-camera time! Hence, this special episode of Hot in Palm Springs!

Beginning his radio career in New England, Taylor has helmed top rated morning shows in Worcester MA, West Palm Beach FL and finally in Palm Springs as the first morning host of KGAY 1065. In 2005 Taylor relocated to Hollywood to further his sideline career, voice acting. As an in-demand voice actor, Taylor has lent his talents to thousands of commercials, cartoons and motion pictures. An avid classic and classic film fan, Taylor has branched out into podcasting and has hosted and produced 103 episodes of the I Love Gay Palm Springs Podcast.

Eric Ornelas, a native of Los Angeles, was raised on the sound of L.A.’s KUTE 102 FM, Power 106, and the original Groove Radio 103.1. In 1999, Eric launched his first dance music radio show in Palm Springs, which quickly shot to number-one in its time slot. Eric has since produced a variety of radio programs, written for magazines, and performed for live audiences in Miami, Las Vegas, Los Angeles, San Diego, and Palm Springs. Today, Eric is a full-time communications professional at a local nonprofit, serves as board president at Safe Schools Desert Cities, an organization that empowers LGBTQ+ youth, and hosts the KGAY Retro Lunch &amp; Brunch every Tuesday, Thursday, and Sunday

Vincent Corrales aka DJ Galaxy has been performing his dJ skills since the age of 13. DJ Galaxy is a beloved favorite within the community and is known for his charitable contributions and high energy. He has won many awards for his talents, most recently he won Best DJ 2020 by CV Independent News and GED Magazine. You can hear him play is high energy tunes on KGAY 106.5FM every Monday, Wednesday, and Friday at noon.