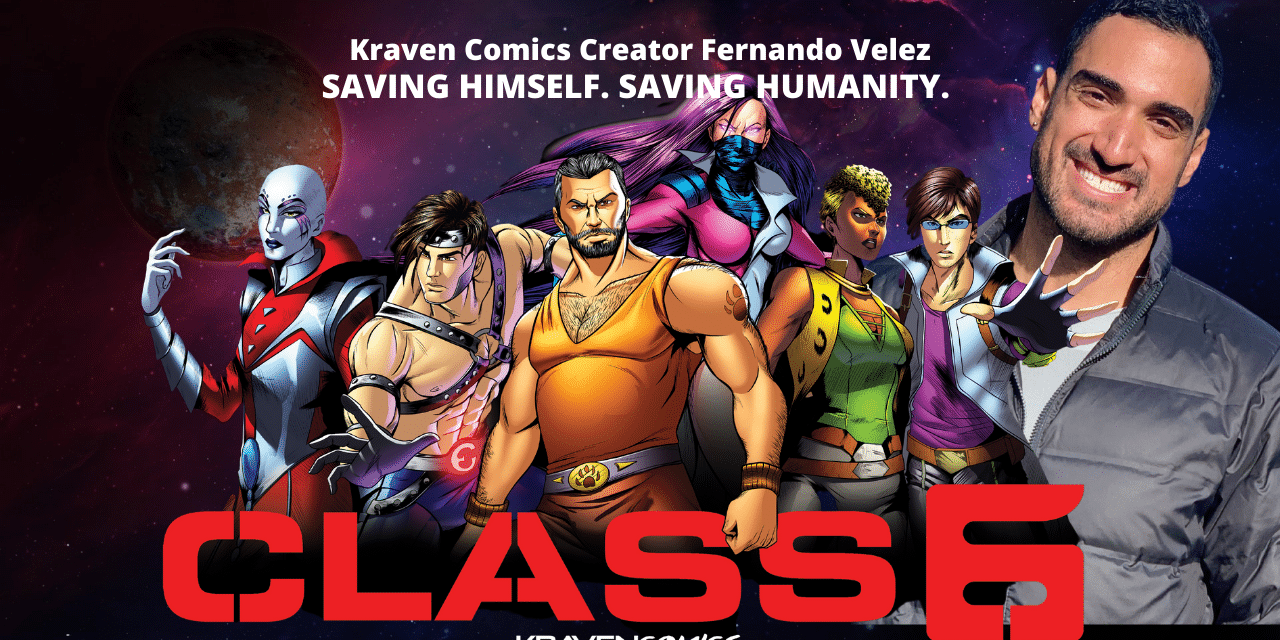 Fernando Velez is the creator and visionary behind Class6, a comic series about LGBTQ superheroes who each play an essential role, not only in securing equality for all, but in the survival of the human race (a broader theme in the Kraven Comics Universe).

Fernando, in his mid-30’s, is from Yauco, Puerto, which he describes as “a small town continually rocked by earthquakes, hurricanes, and a struggling economy. My vision of superhero narratives began at a young age as I wandered the streets of my small town, hearing the sounds of our music and the rhythm of the island.”

“Back then in the ’90s, my reality was different. My mother had lost her best friend from AIDS and as I came out, she struggled in accepting me because she didn’t want to lose another son. Years earlier she had lost a son from cancer, my older brother at the age of 6 when I was 5.

At that time, HIV/AIDS was considered by many as a “gay disease” and my closed-minded mother was fearful of losing another son. For me, being young; being gay; trying to be myself was difficult. My three attempts at suicide ended with me being hospitalized in a psychiatric ward as well as weeks to a religious conversion camp. It was hard to be gay; it was hard to be myself; it was hard to find support.

This world that I was caught in was crushing me. I was just a young kid who lost his big brother, whose dad was an alcoholic, whose mom was trying to provide stability to our family with both love and food on the table.

I didn’t know what to do but to get out of the house, to walk, to listen to the music, and to imagine a different alternative reality with characters who could create new possibilities, new destinies, new paths forward. I recalled reading comics as a child as a form of escape yet not being able to relate to any of the heroes that could help empower me. So, as I wandered the streets, I envisioned a collection of gay people who could save the world, save my world, save me from my disillusionment.

Class6 is more than a series of comic books. It represents gay life in comics and shows the hardship in life that many in our community go through. It’s a narrative of freedom; for that kid who was me, Fernando, and for the many like me who never knew of heroes who could lead to saving us, heroes that could make our voice be heard, to create a better world, to have equality for all.

We aim to provide to the LGBTQ community the rightly deserved representation in the comic book industry. With high-quality pages and attention to detail, our artists give an LGBTQ-centric comic book. Available in different languages and on multiple digital platforms, we will always do our best to make Kraven Comics accessible from anywhere in the world, focusing on inclusivity and awareness of social justice issues. At Kraven Comics, we believe anyone can be a Hero.

As we move towards our goal of being an LGBTQ icon in the comic book world, we want to influence communities to proudly stand for who they are and for whom they love. We want to support and invest in organizations that work closely with the issues we highlight in our stories.”

Watch. Listen. Be Inspired. Perhaps even discover your own inner Superhero.

PromoHomo.TV® is a viewer-supported network. Subscribe for as little as $10/month.

Subscribers who can’t make it will be offered a link to connect virtually ON-CAMERA to a LIVE BROADCAST during the celebration.