“Queen of the Desert 2.0” helmed by Best in Drag Director Jeffrey Drew 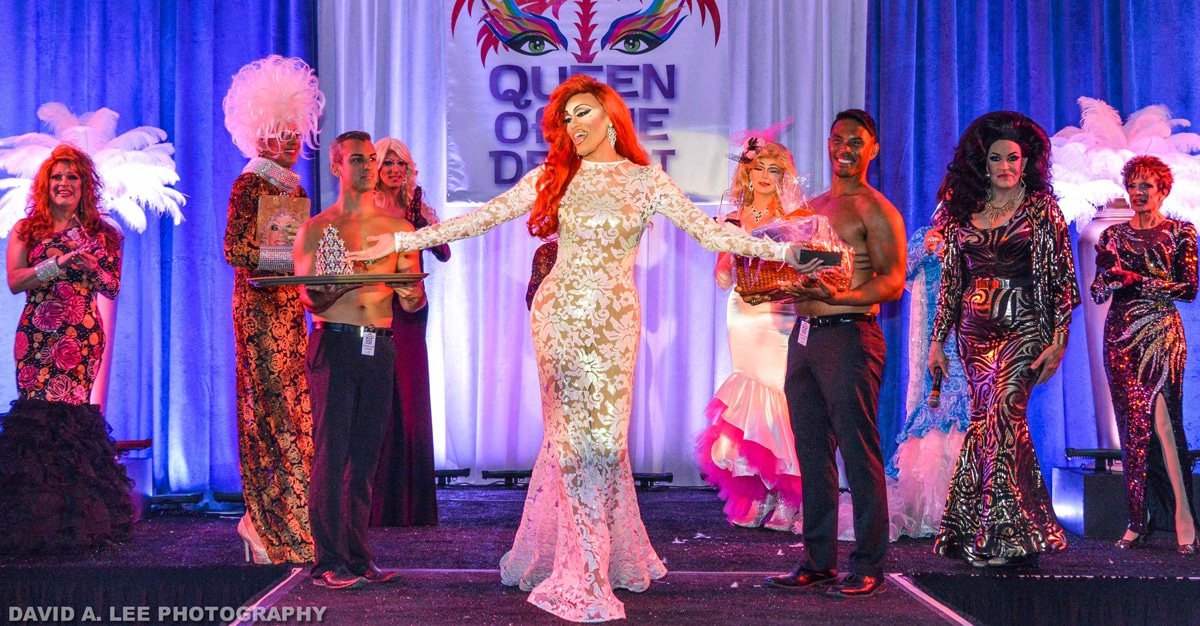 Asked what we can expect from this year’s show, Host Ethylina Canne was enthusiastic. “First and foremost, we’re at a new venue with theatre seating. Jeffrey Drew is directing and he also directs Best in Drag. It will be a tighter show with multi-media because of the large screen at the Palm Springs Cultural Center. It’s going to be Queen of the Desert 2.0.”

Lypsinka in a recent performance

Ethylina Canne, winner of Best in Drag 2016, returns to host Queen of the Desert assisted by Bella da Ball as “Voice of Goddess” on Friday, June 1 at the Palm Springs Cultural Center. The fun begins with cocktails at 6:00 PM and show time at 7:00 PM. The annual event is as much a friend-raiser as a fundraiser, serving as a start of summer outing for local drag fans. Tickets start at $20 with VIP seating available.

Legendary Entertainer Lypsinka, will serve as a celebrity judge and wow the sold-out audience with a very special performance. Joining Lypsinka on the judge’s panel this year will be Joey English, Kaye Ballard, Dottie Du Boise and Maude Chapeau of Les Dames du Soleil.

2017 Queen of the Desert Vanity Halston will defend her lip-sync competition crown against Mona Statseven, Rusty Waters, Lady Vajayjay, Lola, and Xotica Erotica. Each contestant will be scored on talent, evening gown, and bathing costume. The five-person judging panel will select Queen of the Desert and Fan donations will determine the Queen of the Desert Fan Favorite award.

Last year was a sold-out crowd of 700 and raised $35,000 for Desert AIDS Project. Only 130 tickets remain for this year’s competition so fans will want to get tickets soon via Eventbrite. Fans of the competition can get a jump-start on making their choice for Fan Favorite feel the love, by voting for Queen of the Desert Fan Favorite 2018. Each dollar donated counts as one vote.

Asked what we can expect from this year’s show, Host Ethylina Canne was enthusiastic. “First and foremost, we’re at a new venue with theatre seating. Jeffrey Drew is directing and he also directs Best in Drag. It will be a tighter show with multi-media because of the large screen at the Palm Springs Cultural Center. It’s going to be Queen of the Desert 2.0.”

In the tradition of past special appearances, Desert AIDS Project Board Chair, Steve Kaufer, will raise funds by making his drag debut at this year’s event.

The character of Lypsinka was created by veteran New Yorker John Epperson, a native of Hazlehurst, Mississippi. On stage as Lypsinka, Epperson has written and starred in the following critically acclaimed shows: I Could Go on Lip-Synching; Now It Can Be Lip-Synched; Lypsinka! A Day In the Life (2 Drama Desk nominations); As I Lay Lip-Synching; Lypsinka Must Be Destroyed!; Lypsinka IS Harriet Craig!; Lypsinka! The Boxed Set (Washington, D.C. Helen Hayes Award Outstanding Non-Resident Production; L.A. Weekly Theatre Award Best Solo Performance; Drama Desk nomination); Lypsinka! The Trilogy (2014), and a new cabaret show John Epperson: The Artist Principally Known as Lypsinka. Epperson has also starred as The Stepmother in the NYCO production of Rodgers and Hammerstein’s Cinderella at Lincoln Center; The Passion of the Crawford, a fantasia on Joan Crawford; Wallace Shawn’s Evening at the Talk House (Off-Broadway, 2017); and Once Upon A Mattress (Off-Broadway, 2015).

As a film actor, Epperson has appeared in Black Swan, Witch Hunt with Dennis Hopper, Wigstock: The Movie, Angels in America, Kinsey, Vampire’s Kiss and Another Gay Movie. He was the guest curator of the Club 57 film series “You Are Now One Of Us” at the Museum of Modern Art 2017-2018. The audio recording of Wallace Shawn’s Evening at the Talk House will be available from First Look Media in 2018 with the original Off-Broadway cast. Epperson is the author of three screenplays and a teleplay. Epperson and Lypsinka are the subjects of an Emmy-winning television documentary for PBS. www.lypsinka.com