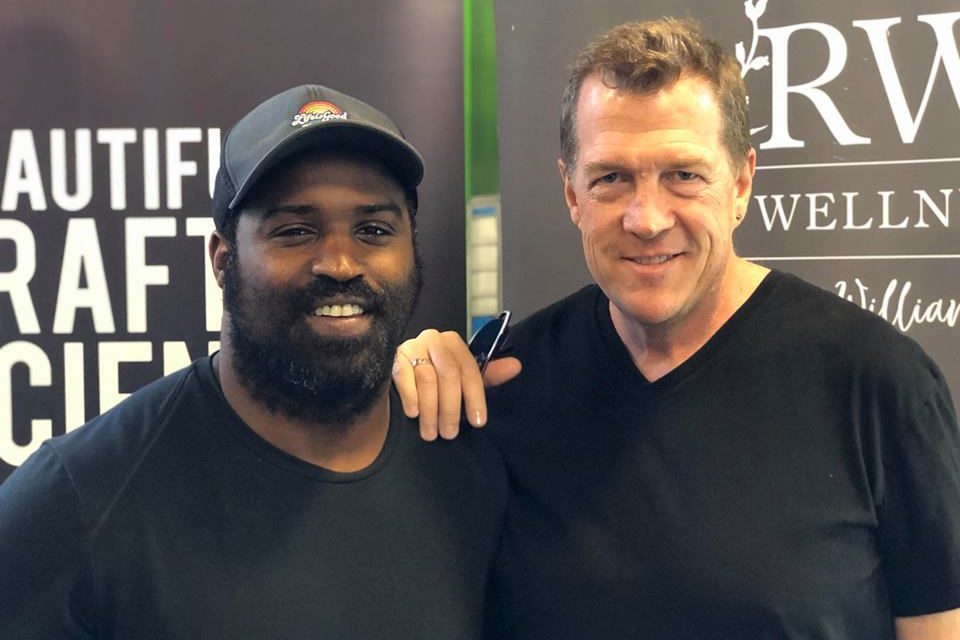 A former NFL running back has launched RW Real Wellness by Ricky Williams, a line of Cannabis Products. Yes, that’s Ricky Williams #34 we’re referring to, winner of The Heisman Trophy. The product is manufactured by OutCo.

The RW Real Wellness launch was touted in USA TODAY, reporting that Williams was “suspended multiple times during his NFL career for marijuana use but has spoken repeatedly about the drug’s benefits.”

Talk about turning lemons into lemonade!

Nicholas Snow was paid to be at the event but THE JOURNALISM IS REAL. No questions were off limits, and they were not decided upon in advance. Nicholas was in complete control of the interview.

As we learn at the official Real Wellness website…

“Throughout his career as a professional athlete, Ricky Williams was often criticized for his belief in the healing power of cannabis. In recent years, as plant-based medicine has become more of an integral part of our culture, Ricky is now viewed as a leading visionary in the movement toward a cannabis-based approach to wellness. Ricky is also becoming more well-known for his work as a holistic healer, a journey that began nearly 15 years ago after his first retirement from the NFL. Ricky has immersed himself in the study of evolutionary astrology as well as other healing modalities including Ayurvedic medicine, cranial sacral therapy, meditation, pranic healing and yoga. Ricky is currently pursuing his doctorate in Chinese medicine and continues to help clients around the world gain a deeper understanding of their lives through his evolutionary astrology practice. Ricky received his Bachelor of Arts in Education from the University of Texas.”

The website also explains the “modern reintroduction to the healing power of ancient herbs.

While herbal medicine has always been an integral part of our existence, it’s easy to see why there’s been a resurgence in its popularity as part of the larger wellness movement. Through the use of science and technology, the ancient wisdom our ancestors used to heal the body with plants like cannabis has been transformed into new delivery methods that align with our modern lifestyles. These innovations coincide with a major shift in the cultural perception of cannabis as a legitimate wellness-based ingredient to a healthy, fulfilling way of life.

RW is a unique line of herbal-based wellness products that can be incorporated into daily routines. Through our carefully chosen delivery methods of salves, tonics and vape cartridges, our products empower our clientele to harness the positive effects of herbs like cannabis in a more conscious and controlled way. With our products, even those who are trying cannabis for the first time can feel comfortable exploring its healing benefits.”